Supernormal is back. Early bird tickets on sale now! 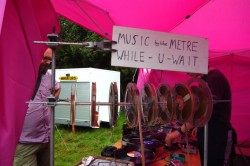 The weekend from the 7th to the 9th of August 2015 sees the sixth Supernormal, where music collides and conspires with art to create a kinetic creative spectacle unlike any other gathering one can find in a rural enclave in the UK.

From its first incarnation in 2010 – when Faust took a chainsaw to the Shed stage and Gnod created a vision not unlike that of a spaceship landing in Oxfordshire – Supernormal has always strived to set itself out from the increasingly humdrum and business-oriented festival circuit, instead seeking to flourish at the dividing lines between disciplines, encouraging innovation and experimentation at all costs. 2014’s event, despite having boasting the most inclement weather of any of the five festivals thus far, was without a doubt the most triumphant and inspiring yet-considerable testimony to the spirit and chutzpah of both artists and audience alike, not to mention the symbiotic relationship between the two which has remained crucial to the way Supernormal operates.

2015 marks the beginning of a new era for Supernormal, with new blood in the organisational team yet the unique approach of the event intact. Loath to fall into any kind of pattern of operation, and determined to avoid predictability at all costs, the controls are set firmly for unchartered territory. Yet as its sixth year approaches, Supernormal remains the alternative’s alternative.

Early bird tickets are on sale now for just £55. These sold out in about 10 minutes last year so let’s see how long they last this time around. Good luck!